Today, our travels took us for a packed day of adventures and food, including some of the most memorable eating moments of the trip so far.

The grape vines in the vineyards of Santorini are set up in a peculiar manner. Since the prevailing winds through the Greek islands can be fairly strong, a traditionally treillaced vine would have all of its budding fruit blown off way before its maturity. To avoid this, the vines are contorted into a crown shaped basket low to the ground. This arrangement also maximizes the amount of moisture from the morning air the grape leaves are able to redivert to the vine.

While all of this preserves the fruit, I'd bet that also has a lot to do with why the wines here often taste of stewed plums. With the amount of heat radiating from the volcanic soil under the strong island sun, the grapes must get "cooked" each day... Anyways, it is a pretty interesting solution to the wind problem, and the fact that they can cultivate vineyards here with so little precipitation (just a few inches each year) is impressive enough.

I spotted these vines on my 5 minute walk to a nearby bakery called Artopoieio, just off the main road. The bakery is located in a no man's land between Fira and Pirgos, so you'd figure it would have to be at least somewhat decent to stay in business. (By the way, everything they say about crazy drivers in Santorini is true... walking to the bakery was an exercise in avoiding cars zipping by at over 100 km/hr on an otherwise small, two lane road). Upon entry, we were greeted by a nice woman (with an edge of gruff-ness) who was also attending to a few locals in to buy their morning pastries (a good sign, one would suspect). She didn't speak much english, but luckily, the language of pastries is pretty universal. I was amazed at the sheer number of different treats being sold in this little shop, from traditional Greek koulouri and bougatsa (yum!) to cookies and sugar donuts. We went on a fried pastry binge and were not disappointed (well, except for the weird pastry that we thought was a doughnut but was really a ball of fried dough encasing a not-so-wonderful vienna sausage-type thing... avoid this one). 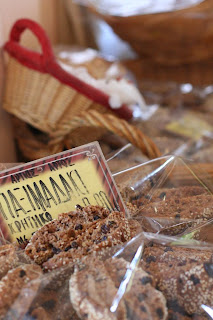 Pictured here are baskets of awesome paximadia, which is basically a dry, biscotti-type cookie. My favorite kind was convered in sesame seeds had rasins baked into it, spiced with anise and cardamom (I think). With just a hint of sweetness, it turned out to be one of my favorite things.

With J behind the wheel of our rental car, we spent the day touring the entire island. One of our first stops was Antoniou Winery, which is toward the southern half of the island, on the caldera side. The winery, which has an killer view and a cool stairwell and tunnel carved right into the mountain, utilizes the winemaking services of a young, recent immigrant from Russia (hilariously, with no winemaking experience) who warmly greeted and served us while striking up some small talk. After another lineup of not-too-delicious wines, we still counted ourselves lucky for the setting and the chance to meet a really nice guy. 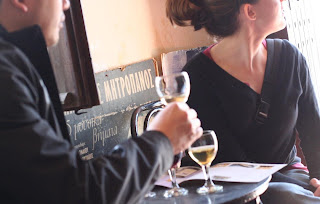 Lunch took us to a wonderfully peaceful, almost perfect little shoreline restaurant (whose name totally escapes me right now...). Here, we feasted on some mezze, which included a traditional dish of mashed "fava" (greek yellow beans mixed with olive oil), tomato keftades (of course, and still so good), and garlic-studded puree of roasted eggplant. 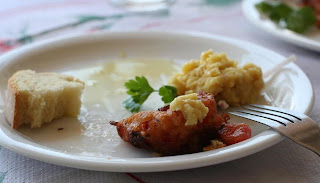 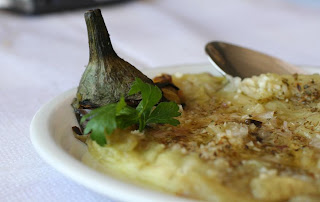 But the real treat were the plates of fresh fried sardines, anchovies and mackeral... oh man. Now before you think, "Anchovies? Sardines? Gross", you need to make sure you've had really fresh versions of these suckers before you poo poo them. The first time I ever had fresh sardines was at the since-renamed Bizou, and they can be phenominally good. 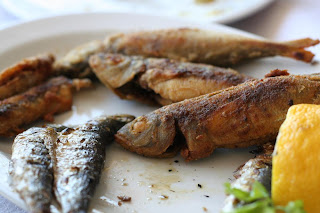 These fish were satisfying in a way that God must have intended. Lightly fried just enough to make the exteriors crispy, while keeping the interiors moist and sweet... we polished them off in no time. Nothing more fitting for a restaurant setting next to a quiet, low-season coastline, with just the splash of gentle waves and the chatter of children playing. 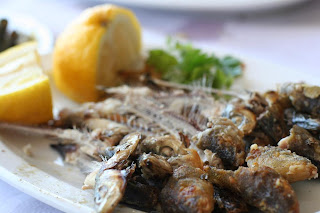 We went ALL OVER the island today, navigating some pretty insane roads (nice job on the first try to Thira, J). By the end of the day, after catching the famed sunset at Ia, we retreated to Fira to dine at Taverna Nikolas, reputed to have good traditional food served by very rude staff (think the Soup Nazi). Nothing could have been further from the truth. At first, our server approached us with a bit of reservation, but after we asked him to help us navigate the all-Greek menu, a huge smile emerged and he suddenly became like a long-lost uncle, eager to have us try some good food! 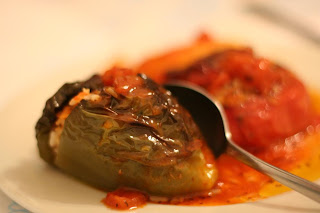 We did pretty well at Taverna Nikolas, polishing off a stuffed roasted pepper and tomato (check out the nice char), roasted chicken with root vegetables and a light tomato sauce, hearty meatballs, and fresh bass. Everything simple, everything tasty, and finally served with some decent house wine. In a weird way, it was almost like comfort food for us that night. No pretense, no overly esoteric analysis... just food that makes you smile. A fantastic place. 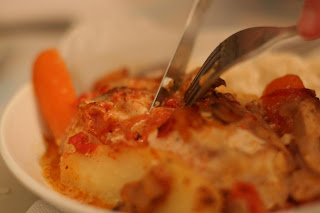 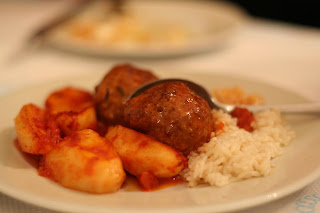 We left after a hearty handshake from our new friend-of-the-moment, content in a day whose sights and experiences were as fulfilling as the food we had.