One thought kept running through my mind: "Why the heck am I doing this?"

It all went back to that fateful evening on September 10, 2008. It was a Wednesday night--our usual C-group gathering--and I had just told Nicole H. that I wouldn't be doing the Kirkland Sprint Triathlon because I was crazy out of shape and hadn't trained at all. Nicole looked at me with these sad, huge puppy dog eyes and said "What do you mean you're not going to run the triathlon?" You see, I'd convinced her to do the race with me, and in her enthusiasm, she'd gotten a co-worker to enter the duathlon that day as well.

The sad puppy dog expression was powerful. Too powerful. I convinced myself that cramming in 10 days of training would be enough. Two Sundays later, we did our first triathlon and I was hooked.

Last November, after running an olympic triathlon with Riley, a thought flickered in the back of my mind that maybe, just maybe, I could try to survive a half ironman... Part of this dated back to my early college days when I had a secret dream to someday qualify for Ironman Hawaii (even though I'd stopped swimming, didn't own a bike, and hated running). Reality eventually set in and I didn't give it another thought... until I found myself planning and registering for the 2010 Chelanman Half Ironman.

Fast forward to yesterday, around 11:45 am. I'm finishing mile 5 of the run at the Chelanman, and the unimpeded sunlight of a 90-degree summer day is really starting to kick my butt. We don't get heat and sun like this in Seattle. My legs feel like deadweights, my strength ebbing away with each lumbering step. And the only thought pulsing through my mind with every breath is "Why the heck am I doing this?"

* * *
A few moments later, I made it to the next aid station and grabbed two ice cold cups of water. I downed the first and poured the second onto my head... the refreshing shock of the cold water snapped me out it a bit. I plodded on slowly, walking whenever I started to overheat too much, and keeping my thoughts on friends and family. At 11.5 miles, I could see the buoys in the lake from the swim earlier that morning... a happy sight. Not too much later, I finally, FINALLY, came down the home stretch and crossed that finish line. Relief!

So how was the race? Pretty brutal. I've never felt so physically exhausted, and I definitely underestimated how challenging it would be to run a half marathon after 56 miles on the bike through hills. But it was also super gratifying... when I saw the finish line and heard the cheers of LaV, Shane, Jason and Kelly, a shot of adrenaline rushed through my body and for 15 seconds all of the fatigue disappeared. And then it was done! 6 hours, 20 minutes, 50 seconds. Missed my original target time of 6 hours (from before I learned of the climbs on the bike ride), but pretty happy with the result considering the way I felt at the beginning of the run.

All in all, a great venue with amazing friends coming to watch--and some running the 10k at the same time! And about that 10k: Jason ran his first race and got 16th place, Shane ran a personal best, and LaV came out of retirement to run the race... Nice! 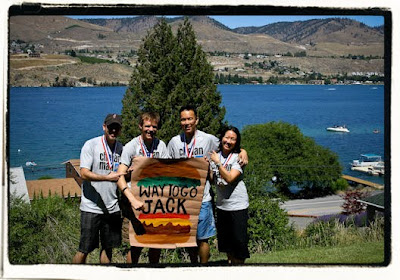 And there's definitely a huge upside to running a race in Washington's newest AVA for post-race hydration... 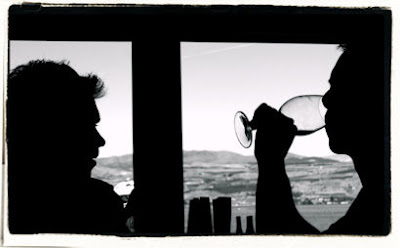 Big thanks go to:

And, of course, to LaV, for patiently putting up with all the training, equipment-buying, and sleepiness, and for being my motivation... you are a trooper.

Venue: Hot, but spectacular. Lake Chelan and the surrounding area is a beautiful backdrop for a triathlon... It felt like we were in California. A very well run race.

Swim: The water was 71 degrees--ideal for going FAST. But winds picked up that morning and the waves were some of the choppiest I've experienced in open water. Following the rope trail under the buoys also wasn't ideal because the winds had pushed the buoys into a curved route. Sighting after the turn was challenging because we were headed straight toward the sun. Still, the lake is terrific, making it a fun swim.

Bike: Fun, but brutal, at least for me. The first half of the course was rolling mild hills along the lake--nice and fast... and a surprising amount of solitude. Not too many people passing me, and a lot of space between riders. It practically felt like a solo ride for the first hour. At about 25 miles, I was still in the top 50. Then the first real climb hit (and my rank plummeted). I've never biked on a route with hills of that length, but I downshifted, found a good pace that wouldn't kill me, and enjoyed the views. A good downhill, probably close to 30 mph, only to be followed by a short, steeper climb, then a seemingly neverending gradual climb. Pain. Fatigue. A false summit, followed by another short steep climb. I've never ridden a bike so slowly. Then, when all hope seemed lost, a blistering downhill (30+ mph?), but with one speed-killing hairpin turn. I beat my target for the bike, but my legs were absolutely burned, even though I was trying to conserve energy on the ride.

Run: Pain. Right out of the transition, my legs were dead tired... but I found a good slow pace to crank it out. After 5 miles though, I had to stop and walk for a while. At noon, it got HOT, and a 10 min/mile pace was tough. It was hard to run unless I had someone to pace off of. At mile 8, I was struggling big time and walking a lot. I swore to myself that I'd never do this again. I'm guessing it was a combination of lack of bike-run distance brick training, the heat, and a larger calorie deficit than I should have allowed. Eventually, that finish line finally showed up.

Awkward moment: Trying to encourage someone I was running with at mile 7. I said, "Just think of the huge, juicy, delicious burger you're going to have when this race is over." She replied, "I'm vegetarian."