Asador Etxebarri, or, how the Basque country rocked my world 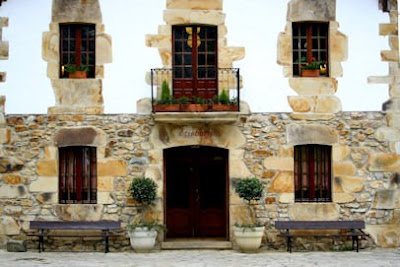 Walking down the stairs and out the door of the restaurant, I knew that something significant had just happened... something akin to a seismic shift in my whole viewpoint on food, its creative expression, and the perfect pleasure of its consumption. Even now, two months after the meal, I can still sense the singular unifying aroma and flavor of delicate, sweet smoke impossibly imbued into the flesh of a single, perfect prawn.

This was our long-anticipated meal at Asador Etxebarri, the pinnacle of our food adventures in Spain, and easily among the five best meals I've ever had in my life. This is the kind of place you want to visit before you die.

It has been two years since the last time I felt so impacted by a meal. The last time was a 24-course extravaganza at the hyper-modern gastronomic temple of Alinea. This meal at Extebarri was, in almost all senses, the complete opposite. One single cooking technique: grilling. But grilling in its most monumentally perfect form. Charcoal, made by the chef from local wood, each one specifically selected for the particular item to be grilled. A custom-designed system of grill racks, able to be independently raised and lowered for the utmost control and precision in heat. Special custom made pans, some pierced by lasers to create holes large enough to allow smoke to permeate, but small enough to keep liquids from falling through. You've never seen anything like this in the United States. 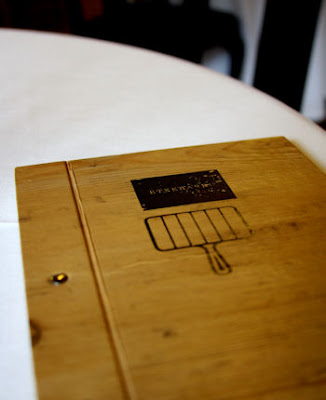 But how would we get by at the restaurant? We don't speak any Spanish, and by most appearances, they didn't speak any English. With an examination of the menu and a noble attempt at communicating our preferences, we were able to coordinate one shared tasting menu with three additional dishes for the two of us. 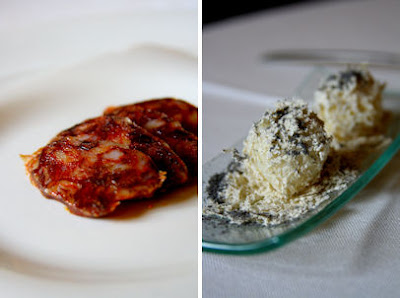 housemade chorizo
Phenomenal texture, with each gem of fat giving way and disintegrating into pure richness.

smoked butter
Butter, as its own course? Absolutely. Scented with sweet smoke aromas. With bread or without... 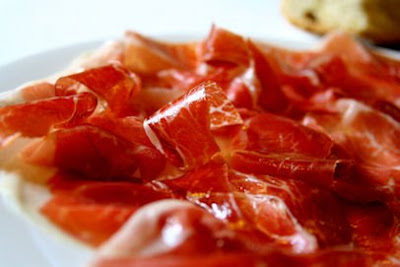 jamon iberico de bellota
Pasture-raised black iberian pig, finished with a diet comprised exclusively of acorns... cured for 1-3 years. Sure, this wasn't the only place to get the famed pata negra, but the richness and decadence seemed appropriate for this meal. 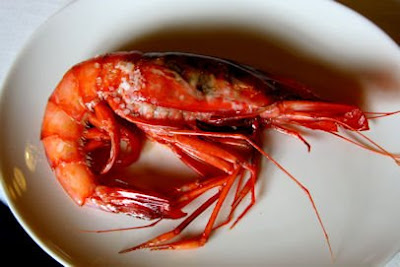 prawn
At the risk of shameless hyperbole, this was possibly the most perfect prawn in the history of humanity's consumption of seafood. It arrived, a single naked prawn, slightly larger than my hand, unadorned but for the crystals of sea salt on the shell. The barely still- translucent shell around the head revealing the abundance of shrimp innard flavor. The flesh was cooked to that precise moment when it transitions from translucence to opacity... but halted just before, rendering an incredible texture--almost as though still alive (think of just-killed amaebi).

I've never experienced quite this level of technical achievement in the cooking of a prawn. The flavor was impossibly good, the first bite a dizzying euphoria, the smoke from the grill somehow permeating the flesh of the prawn uniformly and with the lightest touch. I'm not quite sure how to explain it, but the undertone of smoke was more a seasoning than a flavor, as though the smoke was controlled to impart just enough of itself only to heighten the divine intrinsic freshness of the prawn. Any more smoke would have detracted from the prawn, any less and you wouldn't have noticed it. The genius here is Chef Victor Arguinzoniz's remarkable ability to walk that tightrope. My eyes bugged out and a grin came over my face after that first bite... a grin that made me look 10 years younger, based on the picture Lav took of me. Yes, it was really that good. 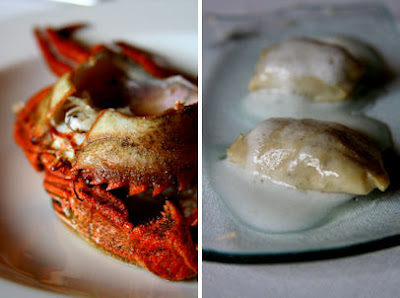 crab
Delicately sweet flesh, tender and flaky, with a focused, purity of flavor. One of Lav's favorites of the meal.

oysters and sea foam
Grilled oysters? You bet. Sea foam? Yep---an emulsion of the juices released by the oyster upon shucking. This was another one of the dishes that expressed the absolute precision of Chef Victor's grilling technique. Somehow, by gently grilling the flesh of the oyster, it was able to simultaneously express a heightened flavor of warmed oyster flesh while maintaining the plump, crisp texture of just-shucked raw oysters. Mind-boggling. 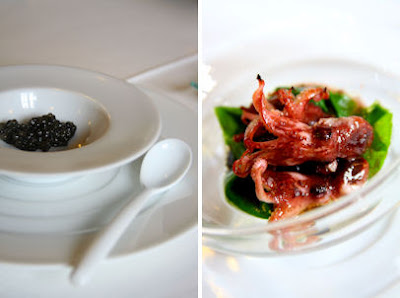 baby octopus
One of my favorite things to eat while we were in Spain. Tender, sweet and succulent, this dish also had the perfect caramelization of the flesh for just the faintest crisp exterior. 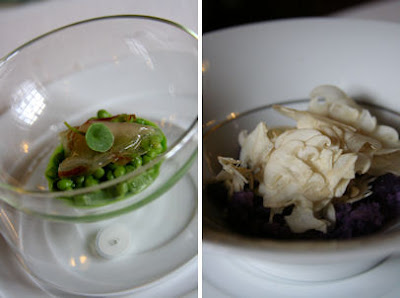 spring peas
Despite the magnificence of everything we were eating, this simple dish stuck out in my mind as one of the more profound successes. A study in the perfection of the sweetness of truly fresh peas. Three perfectly unified flavor notes: sweet pea (warm enough to extrude some juices, still fresh enough to have some crispy snap), gentle smoke, and a beautifully rich sliver of pork lardo.

purple potato, mountain mushroom, farm egg
At first, I didn't understand this dish at all. a lightly smokey mash of sweet purple potato with paper-thin shavings of local mountain mushroom which, served raw, tasted somewhat dry and quite woody (like balsa wood). Not a great combination of flavor or texture... that is, until we realized there was a gently warmed egg yolk hiding under all of the mushroom shavings. We stirred the three ingredients together, then tried another bite. The result was a remarkable synergy between the smooth, sweet texture of the potato marrying with the now earthy (rather than woody) flavors of the mushroom, moistened/enriched/flavored by the elemental creaminess of the egg yolk. Really surprising. 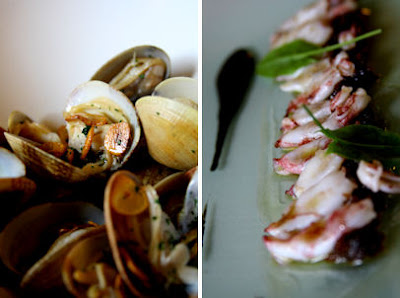 clams
Probably the most ordinariy of the dishes we had, these grilled clams still had an outrageous sparkle of freshness with slivers of crisp, sweet garlic. Again, just the backdrop of smoke to accent the flesh of the clams.

baby squid
Served in a compote of caramelized onions reduced in squid ink, I believe these tender squid were grilled with a different type of charcoal than the octopus. The smoke flavor was less sweet, but equally gentle. The combination of the squid ink into the onion "jam" was masterful---sweet, briny, earthy... perfectly integrated. 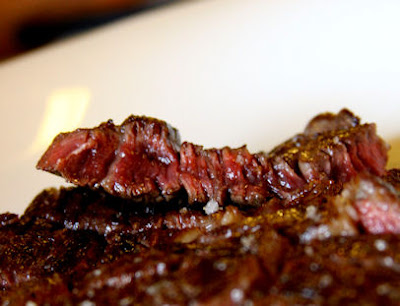 galician beef
Back in 1999, I had my first steak at Peter Luger. Renowned for the quality of its house-aged steaks (each side of cattle personally inspected and selected by the daughter of the founder), I'll be the first to admit that Peter Luger has off days as well as days when they're on their "A" game. That first bite of thick-sliced porterhouse still sizzling on the plate and dressed with melted butter was an instantaneous "moment." It became the steak against which all others would be compared, but which none would quite match...

The approach to steak in many of the asadors of Spain is completely antithetical to the American approach. Here in the U.S., we slaughter our cattle young (no older than three years of age). For the majority of their short lives, our cattle get relatively little exercise as well... both are done to keep the meat tender. In Spain, the most prized beef comes from the Galician Blonde cattle. These cattle are most often put to work for the majority of their lives, developing tough, lean muscle fibers. At 9-12 years of age, the cattle are "retired" from their labor and given a couple of years of leisure, during which time they are fattened significantly. At the time of slaughter, therefore, the cows are actually quite old. The combination of work early in life and leisure later in life results in beef that is intensely flavored, but still well-marbled with fat. The tenderizing comes from 90 days of dry aging, during which time a significant amount of beef is trimmed off. Whatever it is that they're doing, I'm a believer. I've never had a steak (cooked absolutely rare, but with a beautiful crust nonetheless, and with no blood extruding from the slices) so incredibly flavorful, so impossibly tender. And I have no expectation of ever having a superior steak.

This meal was where I realized that many restauarants in Spain do not mark up their wines at all... zero, nada... the price on the list is the same as, or extremely close to, retail. Fantastic. 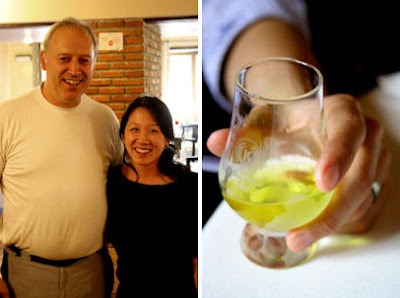 We were lucky enough to have a brief chat with Chef Victor. We tried in earnest to express our effusive praise for the unbelievable meal and our incredulity that everything had been prepared essentially with the same cooking method. He smiled and humbly said "It's just meat and fire..." (a rough translation), asked us where we were visiting from, and bought us a digestif to wrap up our meal as we savored our fleeting moments in this spectacular temple of gastronomy. 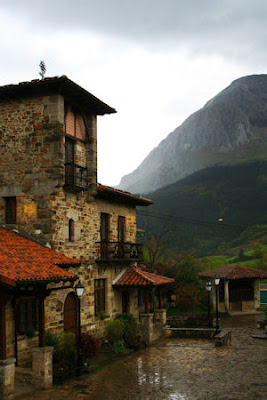 I can honestly say that I still ponder this meal from time to time, that my perspective and appreciation of what can be done to food has been dramatically expanded, and that I wonder on a regular basis how this crazy magician is able to do what he does in his workshop... what a treasure.