Slow-poaching and slow-braising are awesome cooking methods from a scientific perspective because to be executed successfully, you have to take into account the specific, precise physical properties of the protein you are cooking. For example, braising short ribs for 12 hours at 155 degrees F dissolves the collagen in the meat while gently cooking the meat at a temperature that prevents the proteins from seizing. The result is an uber-velvety short rib whose texture exemplifies decadence.

A few months ago, I experimented slow-poaching an egg in an attempt to create a near uniform consistency between yolk and egg white. When you fry an egg, the white tends to seize up faster than the yolk... thus, the sunny side up egg. If, instead, you slow poach it for an hour at 140 degrees, the white and the yolk cook and thicken at closer to the same rate. Get it just right and you end up with a fully cooked egg whose white and yolk walk the fine line between liquid and solid... the yolk ends up becoming unctuously viscous, and a hidden intrinsic sweetness emerges.

I love the taste of poached eggs with asparagus... 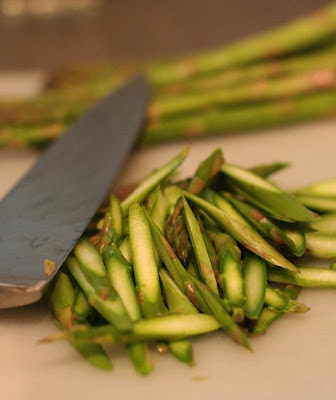 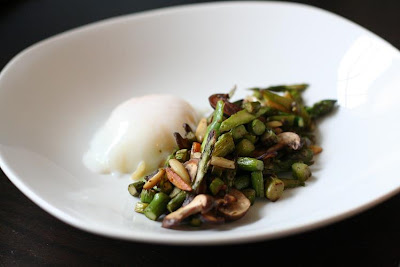 But an hour is a long time to wait for an egg to slow poach to the right consistency. What happens if you separate the yolk from the white and cook it gently sous vide? I put the separated egg yolk in a ziploc bag and placed it in the same 140 degree water bath as the slow poaching egg for a very rudimentary sous vide system. In 15 minutes, the yolk reached the desired consistency. In addition to saving time, cooking the egg yolk sous vide opens up the opportunity to flavor the egg with herbs, salt, pepper, oil, or anything else while it cooks in the bag. 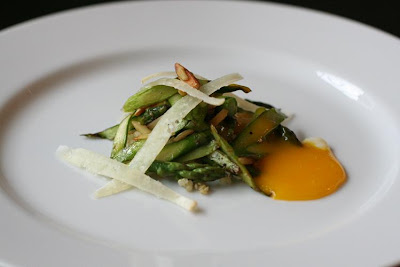 Not sure which method I like better yet... but it's nice to have options.