how to cook pasta without boiling water 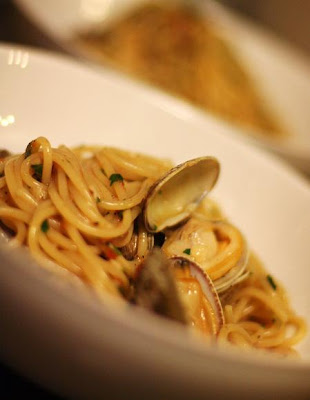 There's no way this should work.

I was reading a terrific article in Vancouver Magazine a few days back, talking about the best pasta in Vancouver. One section of the article talked about chef Pino Posteraro's technique for making dried pasta:

One local foodie who has spent years in Italy told me some of the best pasta he’s ever eaten was at Cioppino’s. “It was the most extraordinary thing. Pino cooked the pasta in the sauce he served it in. No boiling water, no colander—nothing. I’d never seen anything like it.”

What, no boiling water???? How many times have I read about the importance of bringing an ample quantity of water to a rolling boil before adding the dried pasta to ensure even cooking, no sticking, and a uniformly al dente texture? I kept reading:

Chef leads me to his pasta station, his mise en place meticulously organized—every container labelled and dated with a short strip of masking tape. He grabs a large saucepan, cranks up the heat, and begins. He starts with two types of garlic (purée and confit), a little chili pepper, and extra-virgin olive oil. “You must cook the garlic properly, otherwise it gives you indigestion.” He adds white wine, chicken stock, prawn jus, salt, and a splash more olive oil. (The servers have abandoned their polishing and are crowded around to watch. Even the cooks, traditionally jaded and unflappable, take notice.) The sauce splashes and bubbles as it comes to temperature. He grabs a fistful of dry, uncooked spaghetti, tosses it in, and covers it, savouring my confused look. “Bello, you don’t need to boil the pasta first,” he tells me. “Just wait”. . .

After a few minutes, he removes the lid to reveal a delectable symbiosis. The pasta is cooked perfectly al dente, and has adopted a slightly pinkish hue from the sauce it has absorbed. The starches from the pasta saturate the sauce, making it richer, more textured. The heady aroma of wine and garlic perfumes the air. He fills three pasta bowls—one for me, one for him, one for the lurking servers (who fall on it like a pack of jackals). He chastises a waiter for using a spoon to twirl his pasta. “It’s served in a bowl for a reason,” he shouts. “Use the edge of the bowl to gather the noodles around your fork!” The sauce clings to the noodles; the crabmeat is firm and sweet; all the ingredients sing out in unison. “You see, bello? Pasta this good, I would even eat for dessert.”

After years of working with dried pasta, this just didn't seem like this should work. But hey, Pino's restaurant, Cioppino's (in Yaletown), has been named the Best Formal Italian restaurant at the Vancouver magazine restaurant awards for six years in a row. And the general premise of integrating the starch from the pasta directly into the sauce to thicken it seemed sound... the sauce would be naturally thickened and enriched as it cooked, eliminating the need to add back any cooking water.

But would the pasta cook evenly? Wouldn't it clump together? 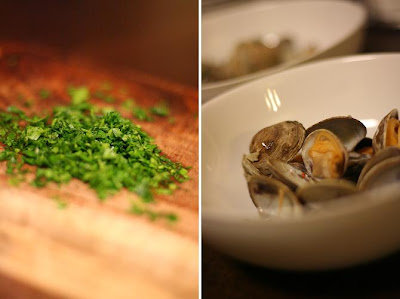 Not at all! The technique absolutely works. It's simple, eliminates the separate step of boiling the pasta, and resulted in a spaghetti e vongole that took 12 minutes to make, start to finish. The pasta had a uniquely toothsome texture while being coated with an unctuous, richly textured sauce full of robust flavor. 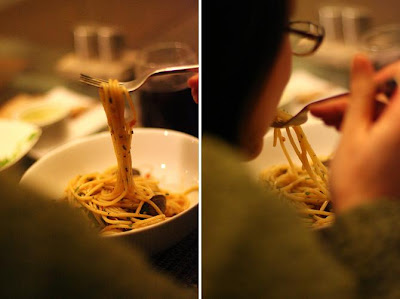 All this from a recipe that needs no precise measurements and can learned by watching this simple video. Check it out and try it yourself. You'll be amazed.
Posted by jack at 9:07 PM