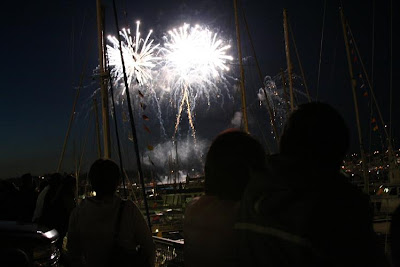 It's been pretty busy around here and I'm behind on a couple of important posts, like dinner opening night at the Corson Building and our terrific 4 day trip to Vancouver... but for now, just a couple of quick thoughts on this holiday weekend. 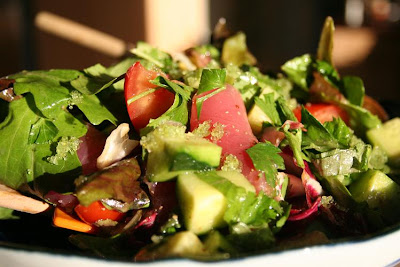 La Verne's parents were back in town for just a day and a half on their way back from a trip to the Canadian Rockies. It being the 4th of July, there was going to be some barbecuing going on... but to keep things from being too heavy, Lav made a terrific sashimi salad to go with our spicy salt and pepper grilled shrimp (shells and heads on for added flavor), kalbi-marinated shortribs, and copper river salmon... all before heading out to Lake Union for the always killer fireworks show.

The next day, we took an impromptu trip out to Whidbey Island, a relaxing haven for tasting wine, cruising through quaint town centers, and enjoying a slower pace than life in the city.

We stopped by Holmes Harbor Cellars, a promising new winery making powerfully extracted wines, which was having its inaugural open house. Affable winemaker Greg Martinez, a former Navy officer, is literally making wine out of his "garage" -- a nicely designed building next to his house -- using grapes sourced from Walla Walla. Definitely worth a visit.

Greg's father in-law, who was helping with the tasting bar, pointed us to Coupeville several miles to the north and recommended the steamed mussels and burger at his favorite tavern, Toby's. Toby's is a great old tavern, full of character and history, although the real drinkers have probably dwindled away. Great beer, cool staff, and seriously some of the absolute best mussels I've ever had... whether at fancy restaurants or seafood shacks. Unbelievably fresh and simply steamed with chardonnay and basil. Probably worth the trip for the mussels alone; I'm an instant fan. Just another reminder of how many amazing things there are to discover here in the Puget Sound.
Posted by jack at 10:17 PM