12 hours in Spain, then off to Portugal 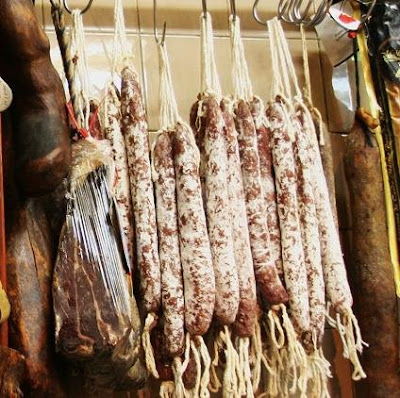 The first time I ever had tapas was at a little bar in downtown Chicago while I was still an undergraduate. The allure was immediate and powerful... little plates of terrific food at a reasonable price where communal sharing was encouraged. Perfection. The fascination continued through the years, but the "restaurant" context adaptation in the U.S. never felt quite right. From what I'd seen, read and heard, I suspected the "real" experience would be something different... something more spontaneous, more boisterous, and even more delicious.

And here I find myself in Spain, finding those very things to be true, my first true tapas experience being more than I hoped for.

The preceding 48 hours were rough... I was only able to sleep about 3 hours during that time. We landed early in Barcelona early in the morning and commenced our exploration of the city fueled only by excitement and anticipation. As my energy began to take a precipitous decline, we walked in to El Xampanyet, a popular bar we spotted after our visit to the Picasso museum.

Following the crowds is always a good idea when it comes to food, and this was no exception. The bar was elbow-to-elbow crowded... people gathered at the bar and around small tables in pairs, groups, and alone, all focused on boisterous conversations accented by sips of beer and bites of different tapas. Somehow, we squeezed ourselves into a prime location at the bar, ordered two beers, and proceeded to point at whatever looked appetizing. Except it all looked delicious. 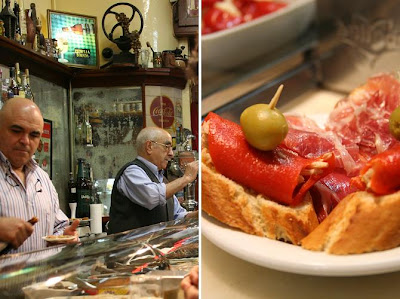 Roasted red peppers stuffed with marinated tuna, served with an olive on bread: Simple and spectacular. Supremely sweet peppers with the most delicious olive-oil cured tuna.

Shavings of pata negra: Unbelievable pork flavor, its decadence obvious even before it touches your lips. The pinnacle of cured meat deliciousness. We will become well acquainted many times on this trip, my new friend. 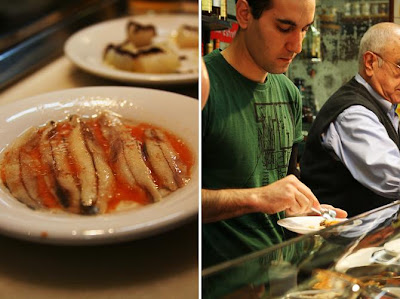 Olive oil cured sardines: Spiked with a hit of spicy vinegar, the sardines were pristine and sweet, beautifully showcasing nothing more than their pure flavor.

Raw bacalao with olive tapenade: Sweet and salty in harmony, the intrinsic sweetness of the cod paired with the briny, but fruity emulsion of olive oil and pulverized olives. 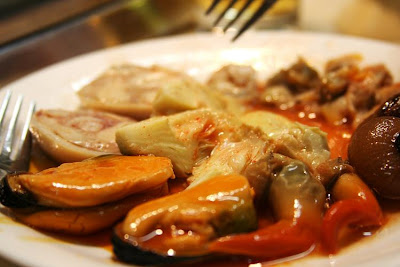 Plate of canned seafood: Wait, what? Canned seafood at the coastal city of Barcelona? Don't worry, this was nothing like canned seafood in the U.S. In Spain, there is a long tradition of canning the very best seafood at the height of freshness... somehow, their canning methods result in an incredible product, giving the seafood a delicately fleshy texture while amplifying its sweet flavor with just a whiff of the ocean dancing on your palate. It seriously makes no sense, but our plate of oysters, mussels, clams, berberechos, and calamari was absolutely fantastic.

Honestly, I was waiting for Madrid to launch into a full scale tapas crawl, but this was a great start. Hanging out in a shaded courtyard after lunch, I had a deep sense that this journey through Spain is going to be very special.

But before any more adventures in Spain, we were off to the airport to meet up with our good friends Shane and Kelly in Porto, Portugal. Flights from Barcelona to Porto were less than $50 on RyanAir, so we planned a 2 1/2 day excursion out there to sample a good amount of port--obviously--get a bit of the Portuguese scene, and hopefully see some of the vineyards in the Duoro Valley. We met up at the hotel at 9:30 pm, and after a long day of travel, I was in the mood for something simple. On the recommendation of our hotel staff, we headed up the street to a small, modest restaurant (whose name escapes me at the moment) lit by harsh fluorescent light bulbs but full of local families happily sharing massive plates of food. In other words, it was perfect for this evening. We grabbed the last open table, ordered a bottle of dangerously easy-drinking vinho verde, and had a small feast: 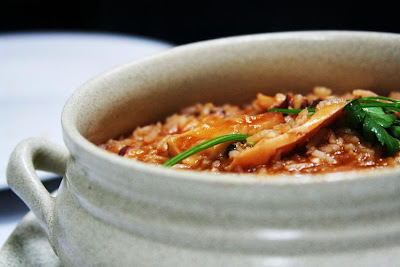 Arroz de Polvo: An absolutely terrific dish. The stewed octopus was so unbelievably tender, you could easily cut it through it with just a fork. The rice was infused with the flavor of the octopus, whose juices permeated the dish, imbuing a faint purple hue. We all kept coming back to this dish. 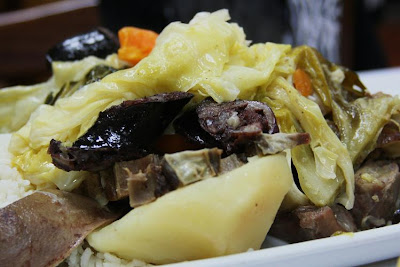 Cozido a Portugeza: We wanted to try something regional and traditional... and this dish fit that calling. This was a traditional Portuguese stew made with cabbage, carrots, potatoes, pork belly, pig ear, blood sausage and a single pig trotter, all served on white rice. Super simple and considered a "peasant" dish (though I find that term problematic), the stew relies on inexpensive cuts of meat and offal to impart richness and flavor. I have to hand it to Shane... the guy will try anything I ask him to. Want to share the trotter and all its gelatinous glory with me, buddy? Why yes, I will...

Grilled fresh calamari: Simply prepared, with the flavor of the calamari taking center stage. In contrast to the remarkable octopus, the meat was a bit tough on the grilled calamari. Not a bad dish, but not a particularly memorable one either. 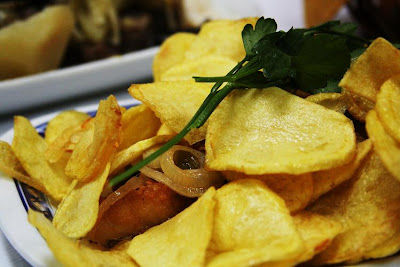 Fried bacalhau: Served with fried potato chips and a quick sauce of sauteed onions with a dash of vinegar, this was like Portugal's answer to fish and chips. Familiar and comforting.

Some great eating in the first day... and looking forward to what Porto has to offer tomorrow!
Posted by jack at 5:07 PM