a bookmark of sorts

Sometimes you get an idea, but it's only half-baked... Here's something I made near the end of the summer that I want to revisit and refine at some point. It was an experiment of sorts that had a bunch of different flavors and textures. 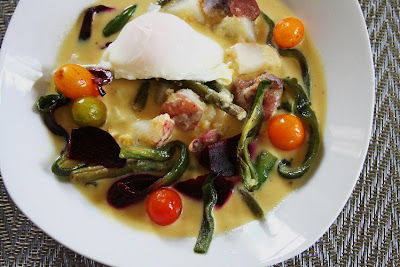 So what's going on here? The base of this dish is a savory broth made of late harvested sweet corn. There are chunks of roasted beets for a complementary, parallel sweetness... roasted bell peppers for some earthiness, blistered green beans for smoky flavor and crisp texture, chunks of potato for body, cherry tomatoes for brightness and acidity... all topped with a poached egg for added richness.

On the one hand, there's probably some discordance here on account of the number of disparate characteristics... but I do think we got pretty close to wrangling everything together into a cohesive dish. Again, only a half-baked idea... but there's some potential. If nothing else, it's a nice memory of the last days of summer.