What makes a great pizza? A trip to Pizzaiolo to find out...

Lav and I finally had a chance to check out Pizzaiolo in the Temescal district of Oakland tonight. A visit to Pizzaiolo, of course, begs the question: Who makes the BEST pizza? No doubt, the Bay Area has really been infatuated with this conundrum of late, with classical neapolitan pizzas serving as one of the many targets of our food-obsessed pursuit of authenticity. As Mark Labberton says, we're really consumed, even crazed, about finding the "best" [fill in the blank... be it pizza, wine, ice cream, coffee, croissant, bistro... heck, even window cleaner]

Maybe in the past, I would have engaged in this debate, finding my favorite pizza purveyor and staunchly pontificating on its culinary superiority in every discernably critical category. But I think I'm entering into a bit of a mellower, relativist phase with respect to food. Particularly since we're blessed with so much good food around here, it sometimes feels wrong to say one place is somehow objectively "better" than another.

So I'd prefer to reformulate the question: What makes a good pizza?

CRUST: Perhaps the most difficult component, the crust must walk the tightrope between the lightly crispy exterior while maintaining the essential soft, chewy elasticity that gives it body. Thin, but not to thin. The best crusts come from a wood-fired brick oven. Temperature? As hot as possible! A blistering 905 degrees, according to the guidelines from the Italian Agriculture Ministry.

SAUCE: Simplicity and great tomatoes are the key to a profound sauce bursting with well-rounded flavor. Also, the amount is key; oversaucing leads to disaster.

Well, now that the stage has been set, it would appear that some commentary is needed for this evening's dining adventure.

--------------------------
The Place: Pizzaiolo has been open for over a year now, with chef-owner Charlie Hallowell -- a pizza fanatic by all accounts -- at the helm. Hallowell is an eight-year veteran of Chez Panisse. He and his business partner spent about a year and a half remodeling a former auto parts store themselves, stripping down walls, building booths and tables, and generally converting a utilitarian space into a chic, cozy urban setting in which to showcase their food.

The buzz on the restarant months before it opened has only increased as a loyal and devoted following has latched on religiously to the dishes coming out of the kitchen and its wood-burning oven. The place has been dinged for its service, but we were seated after only a brief wait and had a pleasant and efficient server. 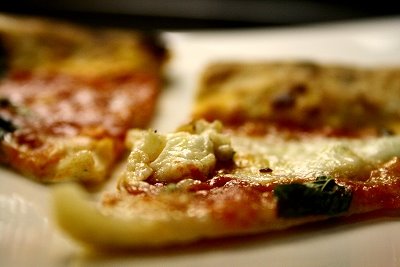 Quote of the Night: "That pork shoulder was so f***ing good!!" -- declared by an apparently well-satisfied customer to the kitchen staff as he violently pounded on the counter with a closed fist 6 times.