The German influence in Chile

Way behind on my posts... already back in the U.S., but wistfully thinking back to the memories of our trip...

Cruising into Valdivia, a quaint riverfront town with a bustling commercial district on one side and the Universidad Austral de Chile on the other, we encountered a profound dose of the German cultural influence on the city. How so? Well, the remnants of German colonization (from an early 1800's pro-immigration program designed to spark economic development) have left behind distinctly German-style wood frame homes... and there's lots of beer... not much left of the language though...

No, the German influence I'm referring to is the Completo. A symphonic abomination of flavor and texture... all based on the premise of a hot dog. 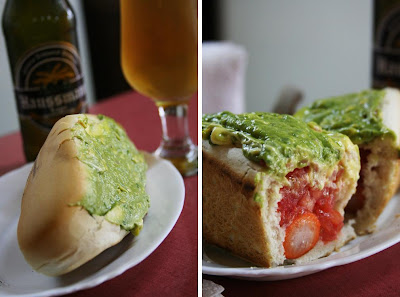 We stopped by Cafe Hausmann for a lunch of the Completo... hot dog, minced fresh tomato, gobs of rich mayonnaise and an outrageous amount of creamy avocado. It actually tastes much better than it looks (particularly with the great house-made beer), but it'll set you back a notch or two on your fat receptors. Lav's not a hot dog person at all, so this sight made her stomach churn just a bit.

Halfway through our meal, a group of business men came in and filled up the counter, ordering plates with mounds of what appeared to be white bread and a reddish topping. With a few beers, they started going to town on these things... and we noticed that everyone else was having the same thing. So we asked the owner what everyone was having, and if we could try one... which led to one of the more significant gastronomic revelations of the trip. The amazing crudito. 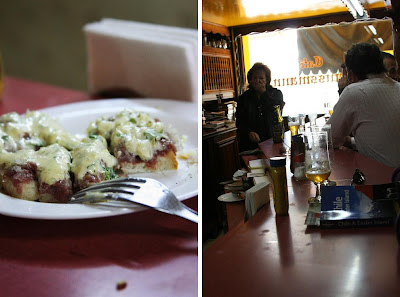 Known to have the best interpretation of this dish, Hausmann's crudito--or beef tartare--is comprised of a slice of white bread with freshly chopped raw chilean beef spread on top with a sprinkling of raw white onion. The owner then gave the beef a healthy hit of salt and pepper and squeezed the juice of a lemon on top. Next, she spread a mild tartar sauce on top and encouraged us to try it with either mustard or chili sauce. Clean tasting and perfectly balanced, with the acidity of the lemon cutting through the richness of the tartar sauce and elevating the fresh flavor of the raw meat... so simple and so very good. Easily one of the best things we ate in Chile. And all the businessmen were psyched that we were eating the crudito as well. 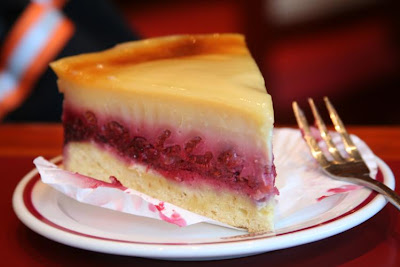 After a meal like that, nothing like finishing with a decadent slice of kuchen, this one from the chic cafe of Entrelagos. Lovin' it.

Email ThisBlogThis!Share to TwitterShare to FacebookShare to Pinterest
Labels: Chile