The Thanksgiving whirlwind, a redux (part 1)

I haven't had to travel "home" for the holidays since my undergrad days in Chicago, so traveling for this year's Thanksgiving weekend was a big adjustment for us. Round trip flights for two from Seattle to Oakland would have been in the neighborhood of $900 (total insanity), so we decided to hop in the hybrid and make a road trip of it. As it turns out, some significant gastronomic experiences were made possible, making the 1,700 miles of driving well worth it.

(According to a little informal research online, driving in the Prius also had roughly half the carbon impact of flying home... though the calculation is imprecise).

One of the things I love about living in Seattle is our proximity to Vancouver and Portland, giving us access to an abundance of different cultural perspectives. Food is incredibly important in each of these cities, and I find myself invigorated by the the range of culinary approaches represented in each place. 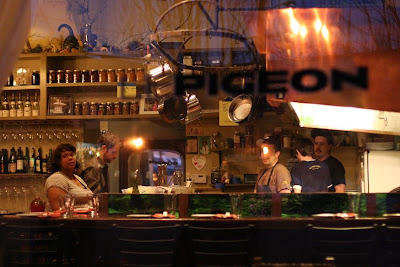 Having left Seattle in the early afternoon, we rolled into Portland just a few minutes before the 5 p.m. opening time of Le Pigeon, one of the restaurants I've been wanting to try for some time. Chef Gabriel and his team are creating some exciting food out of the tiny open kitchen, flanked on two sides by no-reservation bar seating... the absolute best seats in the house. The efficiency with which they are able to prepare and plate consistently high quality dishes with only six burners, a small grill, and a warming surface is remarkable.

The strength of the restaurant lies also in its philosophy: great food in a casual, semi-communal context. Get to know the person sitting next to you. Share tastes of your food. Talk to the chefs and staff about the food and learn a little more about what you're about to eat. All of these things add a meaningful layer of context to the concept of "meal", which we too often take for granted. And enabling this type of interaction amplifies the experience on all levels. 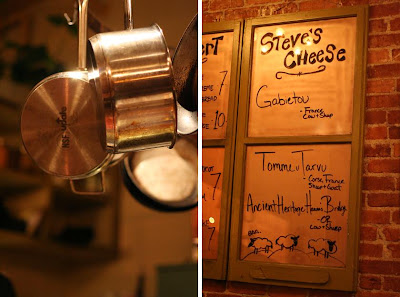 One of the more meaningful passages I recall from the Chez Panisse Cookbook is the discussion on the importance of good bread... simple and carefully crafted to impart depth of texture, and perfect when adorned with just a smear of sweet butter. Le Pigeon does it right, serving slices of baguette from Ken's Artisanal Bakery... more on this later. 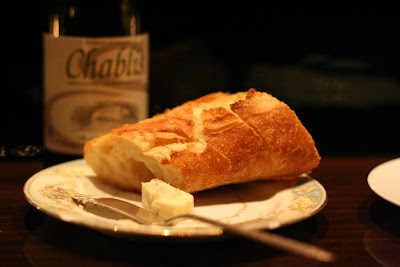 Fois gras, beets, brioche
Unctuous, with a nicely balanced counterpoint from the lightly acidic beets; made even more decadent by allowing the brioche to soak up the melting fois fat as it sears in the pan before toasting it to crisp perfection.

Bone marrow gnocchi, snails, garlic, parsley
Instead of potatoes and flour, the gnocchi is made with a modified pâte a chou (a light pastry dough) utilizing a compound bone marrow butter. This "gnocchi à la parisienne" has a lighter texture but more decadent intrinsic flavor, and allows the chef to control quality and consistency in textural integrity when producing a large number in a small amount of time. The escargot were extremely tender. 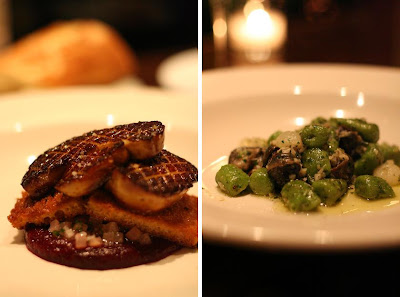 Black cod, melted leeks and lobster puffs
Everything that is wonderful about black cod was masterfully highlighted in this dish. Paper thin, crispy skin; silky/buttery/velvety texture, blurring the lines between texture and flavor; rich, but pure and clean tasting at the same time.

Pork stuffed pork, winter veg and salsa verde
Shredded pork, wrapped with pork into a roulade, then poached sous-vide. A simple textural contrast to parallel the flavor contrast between the two combined preparations of pork. 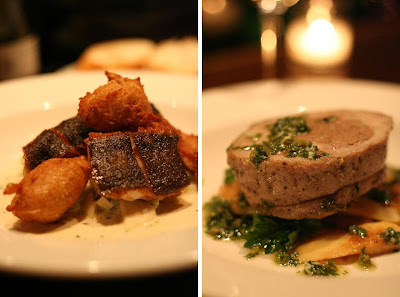 Impromptu egg noodles with truffle and parmesan
Gabriel was explaining that Oregon truffles tend to be lighter than their european counterparts, but this season, their intensity has been much stronger. To illustrate his point, he graciously made a shared plate of the egg noodles with shaved local truffles and a healthy grating of fantastically woody imported parmesan. The truffle and the parmesan were a luxurious pairing, each with an equal voice in the dish. 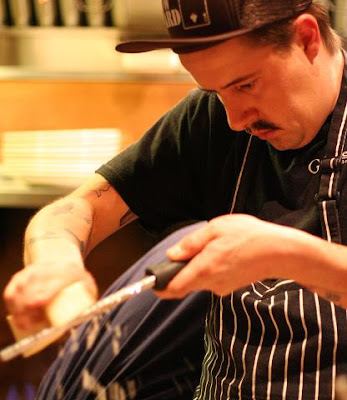 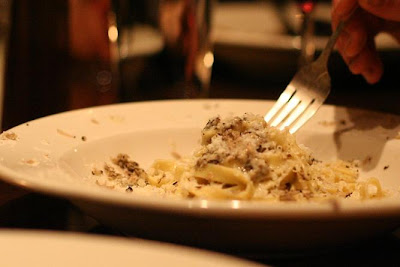 Fois gras pumpkin pie with ginger foie mousse
Another example of a well-conceived combination of components to make a dish. The richness of the fois mousse combined with the traditionally spiced pumpkin puree, with just a hint of contrasting ginger notes. They make so many of their dishes look like simply-articulated expressions of great ingredients, but there really is a lot of thought and intention behind the concepts here. 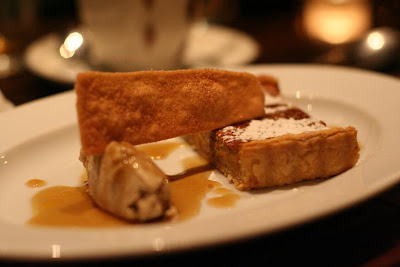 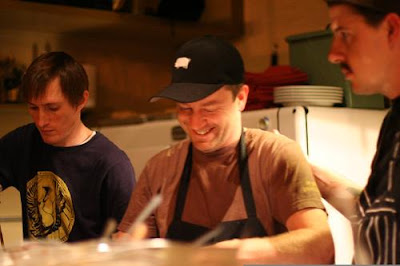 Not a bad way to get primed for Thanksgiving. I'm jealous of Portland... there are some really special things happening here, things that might very well exist specifically because of the emerging culinary ethos and contextual setting that is uniquely Portland's.